As the best choice for most people, our English Spread is our most popular collar style, with a moderate 5” spread that looks great with a tie or without. You can’t go wrong with a Semi-spread if it’s a traditional and versatile collar you’re after. Slightly narrower than the English with a 4” spread, it works with or without a tie. Whether you’re building a classic OCBD or just want the right roll, a button-down is your man--with moderate 3” points. A notch wider spread than our English Spread, but modestly narrower than our Cutaway, it occupies a happy medium for those who want a true spread collar. This scaled-up style takes our most versatile English Spread style and adds ¼” to the points and ½” to the spread. Still moderate, just a little larger. As versatile and classic as the Semi-Spread, on a larger scale. Opt for the Large Semi-Spread if you’re a bigger guy, or just like it bigger with or without a tie. For a true, classic long roll on an OCBD or otherwise, the 3.5” Fitzgerald is the most spot-on option. Go all the way and make it unlined by special request. The practical benefits of a button-down without the visible buttons. Ideal for keeping collar points in check when going tieless. The Forward Point is the style to choose when tradition and professionalism demand a classic style for a suit and tie, and you’re not going to dress it down. Our widest spread for a rakish look that stands out in a crowd. Makes a bold statement with or without a tie. As classic as the Semi-Spread, and still versatile enough to be worn with or without a tie, but on a smaller scale. While still capturing a classic look, the scaled-down version of the traditional Button-Down sports 2 ½” points for something smaller and a tad more modern. Small, rounded points characterize this niche classic that started as the style for Eton’s student aristocrats. The band cuts out the turndown for a tie-free, band-only option that’s come back in style. An uber-casual one-piece collar style with vintage appeal that’s currently having its moment in the sun. Pair with short sleeves and a flat hem to complete the laid-back look. Classic and safe, the one-button barrel is the most popular option. It’s perfectly suited for formal occasions, but can be worn with most anything. Can’t decide? Go with this one. Technically, a two-button style is less formal, but this is a fashion-forward look that works with most fabrics and most situations. This is a great choice if you like to roll your sleeves, because the cuff is slightly wider than our other options. The French cuff, our most formal cuff choice, is a foldover style that requires cufflinks. A must for black-tie occasions, they're a bit too formal for most modern workplaces -- unless you're a senior-level exec in a formal office. First years may want to wait for a few promotions before breaking them out. The tail style is the shape of the shirt at the bottom hem.

A rounded hem is the classic, usual choice on a button-up shirt. If you've never given this a second thought, choose this. Our saddle hem features a shallow curve, just two inches shorter at the sides relative to the front and back, for a look that both tucks well but also looks great untucked.

Straight with Side Vents

A straight hem with side vents is considerably more casual, and generally chosen exclusively for untucked wear. It's a style you might expect to see on a camp collar shirt or a polo.

Our standard buttons are made from a highly durable resin material in an off-white/pale yellow color that works with pretty much anything. Slightly thicker than the average button, they feel substantial without being difficult to button, and are nearly impossible to break.

The natural iridescence of real mother-of-pearl is unmistakable, and looks especially good paired with a crisp white shirt. These are made in a medium thickness for enhanced durability, but be wary of careless dry cleaners — these can chip if not treated with some delicacy.

Our brown, faux-horn buttons are an excellent choice for casual shirts, especially something in earth tones where a white button might seem too plain.

Our navy, faux horn buttons look great with a range of colors when you are looking for a darker, more-refined button but want to shy away from black.

These plastic black buttons look great with darker fabrics, especially those featuring monochrome hues such as charcoal and gray. That said, many will choose to add them to a lighter color fabric for a pop of contrast.

These real coconut buttons feature a fisheye style that work great with very casual fabrics. Consider them with your next floral, camp collar shirt for your next vacation.

Real pearl snaps add a workwear and western feel to a shirt. Try adding them to your next chambray workshirt, or a hardy flannel.

Ratio will monogram your shirt on the left or right cuff for an additional charge. We offer multiple thread and font options. Most choose their initials, but any 3-letter combination can be embroidered. Monogramming is a simple way to personalize the shirt and is a historical staple of custom shirting. It also helps resolve those pesky dry-cleaning mix-ups.

We automatically select our suggested construction based on a given fabric, though you may select your preferred construction from the following choices:

Standard
A crisp construction using a fusible interlining, most appropriate for dress shirts. Collars and cuffs made with our Standard fusible will retain crispness and shape after repeated washings.

Soft Unfused
A lighter, sewn (not fused) interlining, most appropriate for casual shirts. Shirts made with a soft, unfused construction will have a more casual appearance and seams may pucker a bit after a few washes.

Unlined
Made without any interlining. This is the lightest of all constructions, so proceed carefully. We do not recommend using an unlined construction on anything other than our heaviest fabrics, such as our Campus Oxfords. Most customers that choose an unlined collar pair it with our Fitzgerald Button Down.

Choose this option to include a small button and buttonhole on the back of the collar. This is generally only added to button-down collar styles.

Free US shipping on your first order, plus a complimentary fit report 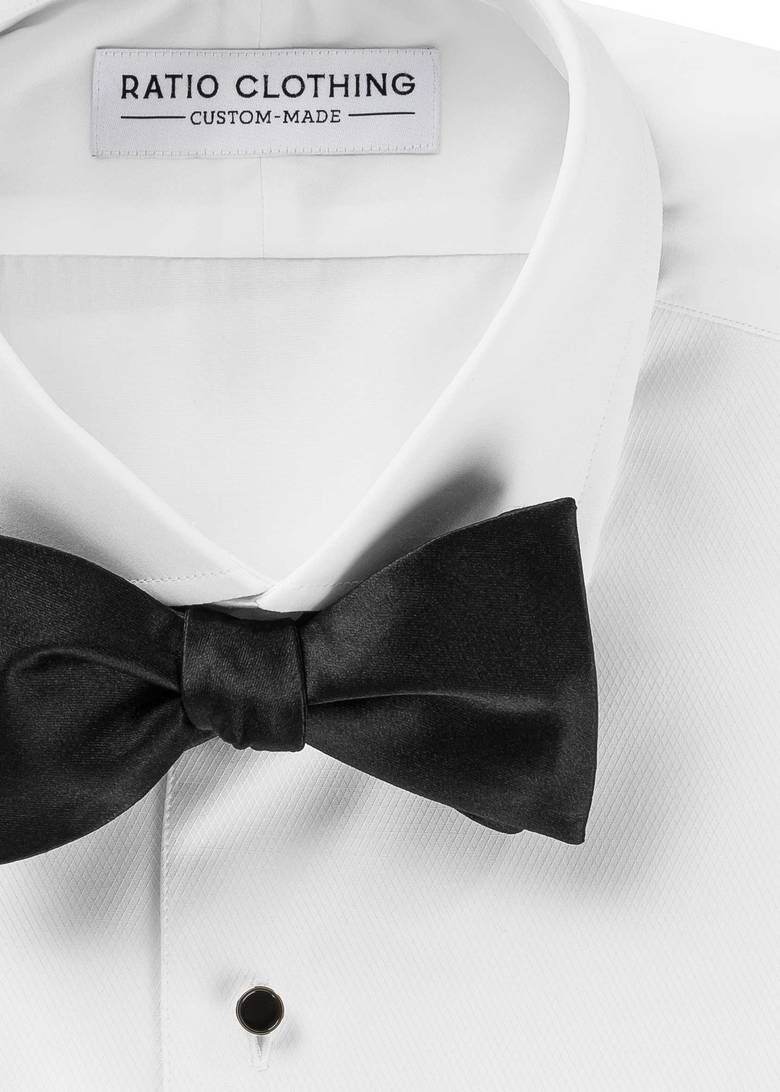 If you don't love the fit of your first custom shirt, we'll alter or remake it for free.

Earn one reward point by purchasing this item. For every ten points you earn, we'll give you $100.00 in store credit.

Also known as a Marcella Bib front, the Pique Bib Front is a classic formal style with a textured panel covering the chest, often pressed and starched for a crisp look up front. According to buzz on the style forums, this is the shirt Brando's Vito Corleone character sports at his daughter's wedding in the opening scene of The Godfather, but at the same time, it's totally timeless.

Our tuxedo shirts all include a removable button-band for the top four shirt buttons, which allows you to wear the shirt with or without studs.

Our goal is to offer the best value in custom shirts by investing more of the shirt’s retail price in the actual garment, not in expensive marketing campaigns, splashy photoshoots or big brand markups.

And, we put our money where our mouth is. If our margins exceed 45%, we'll distribute the difference in store credit to our customers.

Love the Bib fabric! It is very high quality, thick. The collar and French cuffs are thick and stiff. The rest of the shirt is a see-through-type material. Very thin and wrinkles easily, don't know if that's normal for a tuxedo shirt. I would still highly recommend this shirt

Exactly what I needed in a formal shirt. Even if - like me - you avoid black tie at all costs, when you find yourself forced to sport a tux, this shirt makes it all come together.

A perfect tuxedo shirt. Bright white and holds up well for an entire evening of wear.

The pique front looks great and seems to resist wrinkles well. The rest of the shirt is standard lightweight broadcloth, not fully opaque and easy to wrinkle. That isn't a big problem for a tux shirt though were you are going to keep your jacket on anyway.

Take our Ratio Sizing survey to generate your unique custom shirt size. It takes about a minute, and perfect fit is guaranteed.